Ronnie secretly disposes of the champagne bottle she used to hit Carl the night before. She asks for Phil’s help, but he’s annoyed to find out Carl is being held in The Arches. Phil enjoys finally getting his revenge on Carl and Ronnie thinks she’s finally forced him out of Walford, but is he actually gone?

Johnny announces he is going to Nancy’s wedding, leaving Linda in shock. Johnny manages to get them to come along, but at the wedding Mick realises he can’t let Nancy marry Wayne and kidnaps her from the ceremony.
Tina creeps out after her night with Billy, and Cora is shocked to see them together.

Denise is embarrassed about her drunken heart-to-heart with Masood, as she struggles to remember what happened.

Carl hides in wait for Ronnie at Phil’s, surprising her. Carl implies that he’s taken Roxy hostage and grabs some of Phil’s money from the sale of The Vic. Ronnie rushes to The Arches looking for Roxy, but Carl is there in the dark waiting for her. Taking matters into her own hands, gets rid of Carl forever…

Ronnie and Roxy reconcile and they leave for the airport to catch their flight to Ibiza. However, Phil finds Carl’s broken phone amongst Ronnie’s things covered in blood and he’s alarmed by the thought of what Ronnie has done to Carl…

Kat is worried about their finances, but Alfie has a genius idea to make some cash from a blind stock auction. Alfie persuades Tamwar to give him a pitch at the market, but he soon realises he may have a problem with his products.
​
Nancy is furious after being kidnapped from her own wedding by Mick, but her parents try to convince her Wayne is bad news. Will she listen though? 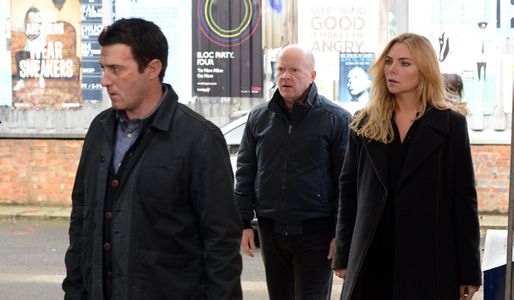