Whitney admits she wants Tyler back and tries to sort things out but can't explain herself in a way he understands.

They meet again but before they can talk Joey walks in and the guys fight.

Despite both loving each other they admit that their problems are too big.

Later Bianca rows with Whitney for letting him go but realises she is packing a bag and leaving Walford.

It's the night of the engagement party and Kat's working hard to keep up the pretence that she's fine.

Drunk and flirting, Kirsty asks her to calm down leading to an awkward exchange between them.

Alfie warns her off Carl and she tells him he's just jealous.

He cuts her deep when he tells her she's throwing herself at the nearest man - like always.

He's gone too far but can't do anything with Roxy there.

Lucy's put out at her first day working for Janine; she's given menial tasks and ends up having ago at Janine for it.

Impressed with her for speaking up, Janine gives her more responsibility.

Tiffany and Bobby defy their parents and spend the day together at the allotments.

Jean's worried when she hears nothing from Ollie all day but all is explained when he turns up and tells her he's spent the day with his daughter. 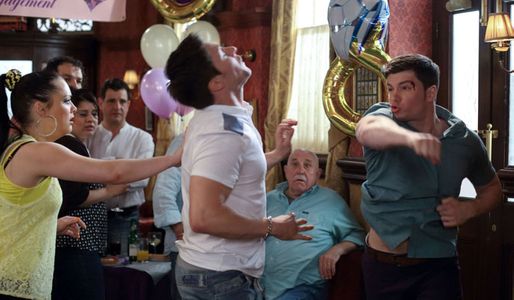