Eastenders 02/07 - A troubled Carol faces the backlash from Buster

A troubled Carol faces the backlash from Buster, Sonia and Tina and later she is put under more pressure when the gossip starts to gather pace. Shirley refuses to hear Buster out however they are forced to put up a united front when Derek from Child Services visits to discuss the possibility of obtaining access to Jade. When Shirley discovers that she doesn’t have to be with Buster to get access, she decides to end their relationship.
​
Furious, Shirley follows a mortified Carol back to the Butcher’s and after initially arguing; the women find themselves opening up to each other. Carol talks to Shirley about being ‘cancer-free’ and also about how she finds herself ‘repulsive’ since her mastectomy and she is taken aback by Shirley’s empathy. They talk about Carol’s scars when she admits she has never looked at her chest since the operation, a concerned Shirley convinces her to accept her body and be proud she has beaten cancer. Nervous, Carol stands with Shirley in front of a mirror and finally comes face to face with her topless reflection for the first time.

It’s Linda’s birthday and her and Mick head off to a day spa to celebrate. A stressed Nancy feels guilty for shutting Tamwar out of her life however things don’t go according to plan when they try to make amends and Tamwar and Nancy are both frustrated when they fail to express their feelings. As Tamwar leaves Nancy looking after Ollie, Nancy suddenly finds herself collapsing and having a seizure.

Kush is surprised when Martin reveals his relationship with Stacey is back on track and Stacey pastes on a smile when Martin surprises her with his idea of a romantic meal at Beale’s. 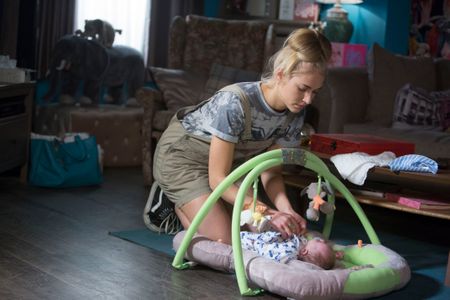