Bobby feigns illness on his first day of school meanwhile Jane persuades Ian to try and forget about what they found on Lucy’s phone. With his head low, Peter returns from New Zealand and visits Max asking for his permission for Lauren’s hand in marriage. Max is shocked however Peter’s love and support for Lauren wins him over. Max gathers family and close friends at his house for Peter’s surprise proposal to Lauren. However just as Peter asks the question, Ian suddenly runs out of the house.

Pam asks Carol if Sonia has returned from her course as she wanted the charity money still hasn’t been transferred. Carol hasn’t heard from Sonia soon becomes worried. When Sonia finally arrives home, Carol and Rebecca berate her for not returning their messages but a pale Sonia is sick. Sonia tells Carol she has a hangover however when she continues to be ill, Carol worries. Sonia finally tells her mother that she has been feeling the pressure of not meeting her weight target during Fat Blasters so went to a boot camp to lose a few extra pounds and has probably overdone it.

Aleks receives a call from Tamwar and makes his way over to the office where an enraged Marta is waiting. Nervous, Aleks says that Roxy was just some drunk English woman and as he talks to her in the playground, Charlie spots them and heads over. Marta introduces herself as Aleks’ wife and Charlie is stunned. Later, Charlie warns Aleks that if he doesn’t tell Marta he wants a divorce today, he will tell Roxy. 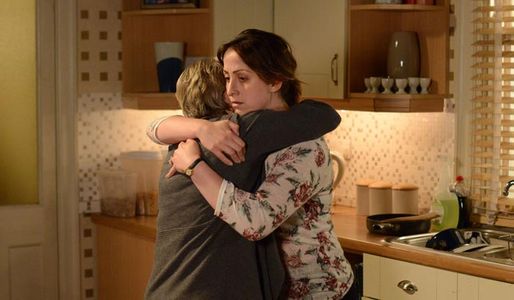