A desperate Karen sets out to find a job but with no luck at the Minute Mart or The Vic, she tries her luck at Beale’s but with no luck. A deflated Karen finds herself helping Jane in the Square where she catches Bernadette home from school. Not believing she’s unwell, Karen insists she returns to school and fed up, takes a stunned Jane home for a natter. As Karen rants about her day, she is shocked when Ian arrives, oblivious that he was Jane’s wife after their encounter earlier on. Karen takes advantage of the situation and manages to get a job at Beale’s. Back home, Karen soon realises what’s going on with her daughter

Abi tries to worm her way back to Steven but he reminds her that what happened between them meant nothing. Later on, Abi realises that Steven is tracking Lauren’s phone but as she shares her thoughts and suggests she would make a better girlfriend, she inadvertently gives him another idea… to buy a phone charger that is also a camera.

Robbie struggles to establish himself with the market traders and his day grows worse when he learns he can’t move in with Dot; leaving him without a home. The new nanny, Ingrid, starts her first day looking after Ricky and Amy. Fi continues to make her mark on The Vic. 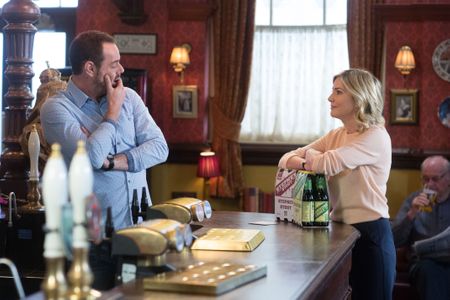