Linda still isn’t sleeping and out of his mind with worry, Mick sits with Linda and pleads for her to tell him what the matter is. Linda tries to convince her husband she is okay, even blaming it on the guilt she feels about hitting Dexter. Mick doesn't buy it and she is scared when Mick tells her he is going to book an appointment with the doctor.
In order to prove a point, Linda asks Nancy to invite Dexter over for dinner so she can apologise properly. However unable to face sitting at the table where she was attacked, Linda breaks the table. Mick is alarmed by Linda's increasingly erratic behaviour and after the meal, Mick runs Linda a bath. However when she smells the lavender bath foam Mick is pouring in, she is violently sick. Mick tells her he’s worked out what’s wrong… she’s pregnant…

Max wants to find out who is following Lauren and calls Keeble. She insists the person has been dealt with and won't be bothering Lauren again. Meanwhile Emma meets DS Bryant assuming he is watching her every move however she is shocked when he admits he is under orders from Keeble to watch the Branning family.

Later Keeble meets with Emma and warns her to stay away from the investigation – she doesn’t know Max enough to gamble her career on him. Later, a worried Emma tells Max she thinks they have rushed things and needs space.
Elsewhere, Tina’s black eye is slowly fading however that doesn't stop Aunt Babe from noticing. She tells Tina that Tosh “can't have been brought up right” giving Tina an idea.

Also, an excited Pam encourages the idea of a naked charity calendar and Sonia is surprised by the number of people ready and willing to get involved. 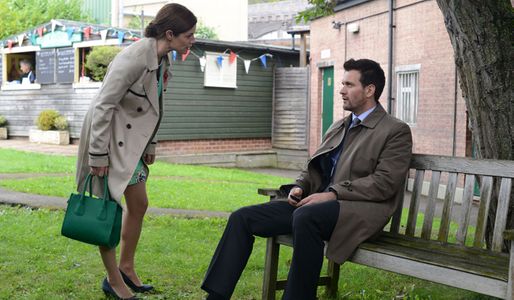