Tensions remain high amongst the Mitchells following Ben’s discovery but can he get to the bottom of what’s going on? It doesn’t take long for further truths to come to light threatening to tear the family even further apart.

It’s the day of Shabnam’s Mehndi and Fatima helps her prepare for the celebrations. After some encouragement from Tamwar, Shabnam makes amends with Stacey who agrees to come to the Mehndi. Outside, Shabnam has a conversation with Martin and comes to a startling realisation. As the celebrations kick off, Shabnam shares her emotional speech for the wedding causing an upset Stacey to leave. A suspicious Shabnam follows Stacey and has a sudden realisation that Martin may not be the father of Stacey’s baby.

Meanwhile, Kush’s stag is well underway at The Vic but Whitney grows frustrated when Lee chooses to stay with the guys instead of spending the evening with her. Elaine shares some advice to Whitney but can she carry on like this? Across the Square, Ronnie pushes forward with her plan. 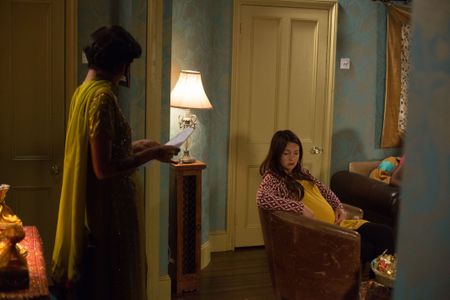 EastEnders 10/11 - Tensions are high in the Square

Eastenders 27/06 – Tensions are running high at The Vic