Carl is quick to let Max believe he slept with Kirsty even though behind closed doors she makes it clear they're not getting back together.

She's hurt when she bumps into Max and he confronts her over it.

Kirsty tells Carl to move on while he tells her then Max that he did nothing to encourage Max's assumptions.

Max tries to talk Kirsty round and after some serious arguing the tension turns sexual.

They're busy ripping each other's clothes off when Lauren walks in.

Michael is working hard to discredit Danny; he finds out his car is a loan and has Tyler tell him it's being repossessed while he's in the middle of closing a big deal.

The deal falls through and Michael is thrilled.

Tyler leaves to go on a cruise ship and when Whitney finds out he stops him in his car in the street - rather than telling him to stay she says her final heart felt goodbye.

Billy and Lucy end up in a power struggle working for Janine and Fatboy gets himself an embarrassing make-over from Poppy. 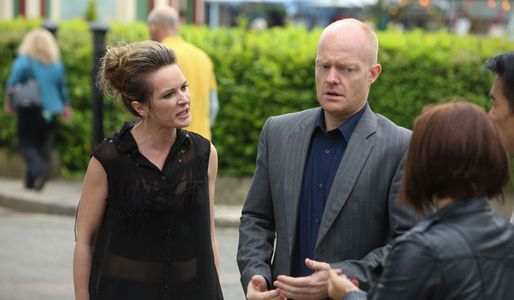 EastEnders 09/08 - Are Kirsty and Max giving it another go?