Alfie is so wound up by Michael that he decides to confront Ronnie. She's in The Arches, defending her decision to move in with Jack to Phil. A furious Alfie then arrives, demanding to know how often she and Roxy have seen each other. Ronnie is sorry for the past, but says he'll have to get used to it - she's family too. Kat is later shocked to learn the truth.

Roxy returns to the pub, unaware of what's gone on. But then she receives a text from Ronnie. Alfie packs her stuff but she begs him to stop, promising she won't see Ronnie again. Roxy says she'd do anything for Alfie and his heart breaks. He decides they need to leave Walford to get things back on track.

Elsewhere, Dexter and Sam receive a letter telling them the transplant operation will be in three weeks. Dexter's feeling OK about it until he realises how worried Ava is. He later throws Jay a birthday party and gets drunk. He misreads Lola and leans in for a kiss - but he's left humiliated. He later admits to Abi - drunkenly - that he's terrified about the upcoming op.

Also, David puts his plan into action as he heads over to Janine's with a bottle of red wine. She offers him £500 but wants it back with interest, in one week. 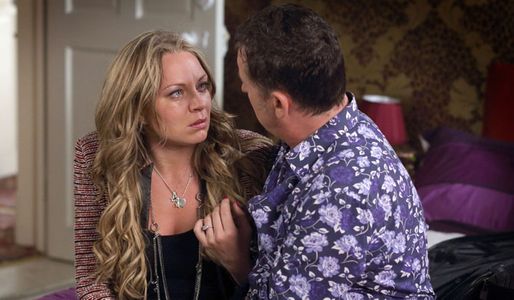