Paul tells Les he knows what’s going on and encourages him to take a stand. With Paul’s words resonating, Les visits Babe and tells her they’re prepared to go to the police even if it means the truth about Christine coming out. Later on, Babe spots Les and Pam talking and realises Pam doesn’t know what Les has said and decides to up the payments leaving Pam devastated. With Pam still refusing to admit the truth, Les starts to fall apart but Claudette arrives and offers her support. As the pair talk, Les admits he misses Christine and Claudette reveals she still has some of her things. After seeing how upset Pam is, Les secretly decides to wear Christine’s belongings...

Vincent refuses to be the father of Donna’s baby but after a heartfelt plea, Vincent agrees to talk to Kim about it. His attempts are thwarted however when a fuming Carmel turns up to confront Kim on why she was banned from the Salsa show and the pair end up in a dance off. Vincent returns to Donna and tells her he’s having doubts but when he arrives home, Kim clocks that he is hiding something forcing him to admit the truth.

Elsewhere, Lauren grows frustrated when Ian continues to lock himself away and ignore Louie leading her to confront him. Ian ignores her pleas and tells her that Jane is moving to Birmingham at the weekend. Ronnie agrees to go on a double date with an anxious Roxy, but at The Vic things get too much for Roxy and she leaves.​​ 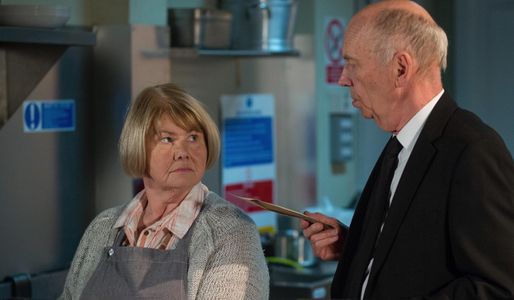 Eastenders 03/6 - Ronnie takes matters into her own hands