EastEnders 08/08 - Lauren is back in the square

Lauren is back in Walford but now one knows how to act around her, terrified she's going to relapse no one can cope when she leaves the house alone.

Abi explains to her - she hurt a lot of people and caused a lot of pain - it'll take a while to get back to normal.

Lauren tries again to make amends and leaves a positive impression with Lucy and Whitney and explains herself to Joey - there's still obviously a bond between them.

Max tells Kirsty that Lauren is his priority putting their future happiness in serious jeopardy.

Poppy advises Sadie that the most important thing for business will be getting the women on side - after ignoring her at first she sees she's right and buys her a drink at the Vic.

Everyone is competing to get into Janine's good books - Lucy's desperate for responsibility and Danny's trying to get back on her good side.

Kat receives a letter to say Ronnie is getting out of prison while Whitney manages to land her old job back. 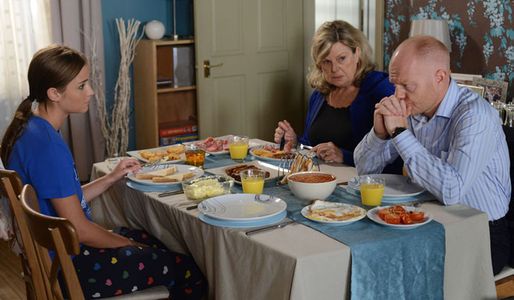