It’s Amy and Ricky’s first day at their new school but as Glenda worries it’s too soon for them, Jack tries to distract himself as he waits for the Coroner’s report. After a difficult start for Amy and Ricky, Jack returns to find the Coroner waiting and learns the truth. A raging argument quickly ensues between Jack and Glenda.

Carmel holds a surprise baby shower for Denise but she is left less than impressed. Denise puts a nearly end to the celebrations leaving Shirley to question if everything is okay. The surprises continue for Denise when Libby arrives and reveals she’s staying for the birth.

Mick desperately searches for a way to find money to help Elaine and Linda and is forced to go to desperate lengths. ​​After talking to Denise at the Minute Mart, Mick comes to a worrying realisation and decides to tell Shirley –Buster had an affair and he thinks it might have been with Denise.

Elsewhere, a grumpy Phil returns home from the hospital. Louise is wound up by a boy from school, Keegan, and her and Bex discuss Bex’ future.

Meanwhile, Babe gets up to no good, but is caught in the act by Mick. Tina seeks help from Mick to learn to ride a bike but things don’t goto plan.​ 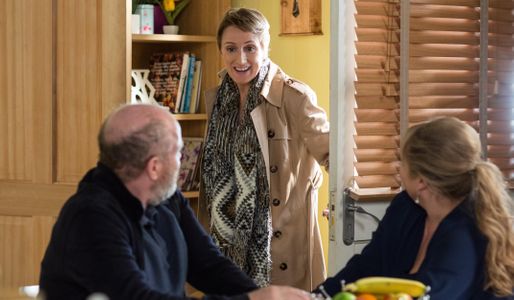