The Carters prepare for Stan and Cora’s impromptu wedding but Tina grows frustrated when Shirley and Mick refuse to be in the same room together. After some tough words from Tina, Shirley arrives for the wedding with Buster but soon leaves after Mick lashes out.

Meanwhile, Stan receives a visit from Babe and Sylvie where Stan is keeping his own secret from his wife to be. Stan says an emotional goodbye to Sylvie but they are soon spotted by Babe who takes great joy in sharing their secret with Cora – however it doesn’t deter her and she still plans to marry Stan.

Fuming, Stan says some harsh words to Babe and she leaves.

Back on the Square, Carol receives a shock phone call to tell her that her dad, Jim has passed away. Elsewhere, after some encouragement from Ian, Martin decides to tell Sonia the truth about losing the home but Sonia doesn’t have a chance to take in the news before she learns the upsetting news about Jim.
Karin Smart arrives in Walford looking for Phil but a curious Max intercepts her. Unaware that not all is what it seems with this widow, Max makes a business deal with her and the pair end up back at his place.
​
Kat and Alfie receive a visit from the social worker and the pair do their best to reassure him that they are capable parents. However, it soon becomes apparent that Kat has got a long way to go before she is back to her usual self despite Alfie’s support. 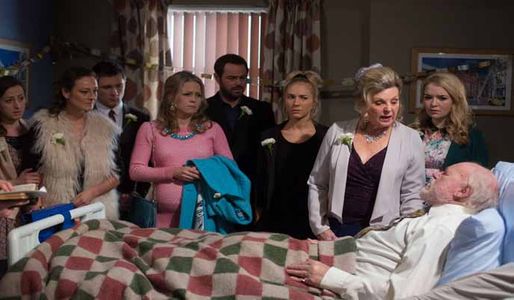