EastEnders 09/08 - Are Kirsty and Max giving it another go?

Michael and Janine continue to fight over Scarlett but they get a harsh wake-up call when they let her pram fall over.

She is unarmed but it makes them work together.

It's all going well until Janine realises that Michael is playing her - making her want him.

Max and Tanya keep having rows on the phone over how to deal with Lauren.

Meanwhile Lauren takes herself to the Vic to talk to Kirsty about Max.

The conversation seems to be going a bad way for Kirsty but Max is left shocked when Lauren returns home - with Kirsty.

She tells him she doesn't want him to be a good dad and to stop focusing on her life.

He ends up putting Kirsty's wedding ring back on her finger!

Lucy gets a promotion and brags about it to her dad, but when all he cares about is whether or not she's told Janine about his shady dealings she makes him feel terrible by telling him she's stayed quiet.

Cowardly Ian makes up a story to get Jean to help him get rid of Carl when he comes to Scarlett’s - he'll be back next week. 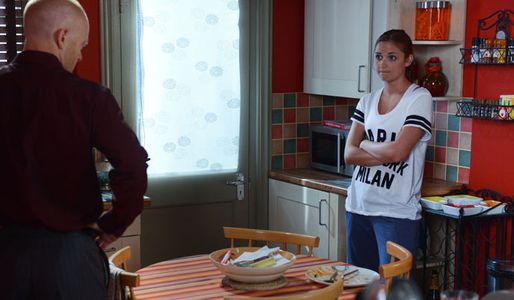