Roxy tries to tell Alfie about wanting Ronnie to come back to Walford after her release but is sure he'll come around.

Meanwhile he's shocked when he tells Kat and she doesn't seem bothered.

Later Ronnie tells him her plans and he's absolutely furious.

A distraught Roxy tells agrees not to bring her home, not realising over at the prison Ronnie has been greeted by Kat.

Dealing with the news that Ronnie's out puts an end to Michael and Jack's feud while Kat's insisted to Michael she's made peace with the whole situation.

Ian feels guilt over lying to the police but when he takes food to the Brannings, his kind gesture just piques Kirsty's suspicions.

They're sure the witness must be a set up and vow to find out who it is.

Kirsty overhears Denise telling Kim what Ian told her - he is the witness for Carl.

Carl narrowly misses a chance to finish the job on Phil after Shirley admits to Jean that she's stolen Phil's money and is planning to leave the square. 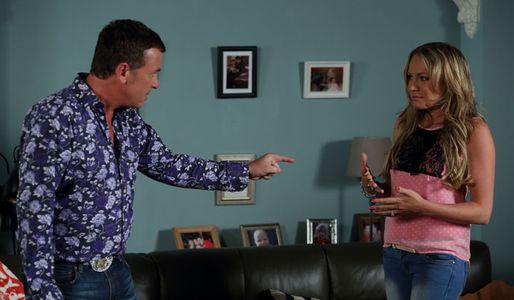