Sharon’s day is off to a great start when The Albert receives a raving review from a local newspaper. However her mood soon takes a turn for the worse when Phil is forced to come clean about Vincent who now owns The Albert. Sharon furiously demands that Vincent and Kim, who are in the bar, leave but her fury grows when she learns Phil forged her signature on a contract. Back home, Sharon angrily warns Phil that as soon as she has found her birth father, their marriage is over. Later, Phil hands Sharon a piece of paper telling her he has found her dad. Phil drives Sharon to the address and she prepares to face her past.

Les and Pam are planning the Centenary party for their business but the absence of their grandson Paul is playing on their mind. Les turns to Claudette for support but little does he know Paul has already arrived in Walford and spots them together. Meanwhile, Paul makes an impression on Lola after accidentally knocking her over and she invites him for a coffee at Blades but it soon becomes clear Paul has his eye on Ben. Paul decides not to stay in Walford and goes to leave but changes his mind and they soon find themselves sharing a passionate kiss. Paul decides to see Pam and Les and they are thrilled at the family being reunited.

Elsewhere, Ben grows frustrated at Abi’s controlling behaviour when she invites him for drinks with her new work colleagues and Carol encourages Cindy to make a decision about Beth. 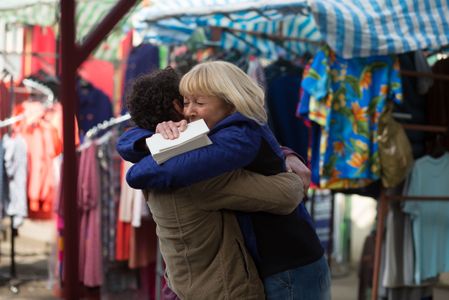