Determined to fix things for Phil, Ronnie goes to see Sharon but she is stunned when Sharon tells her that Phil was driving the car at Christmas. Despite this, Ronnie tells Sharon she has a home over the road and a family that needs her. Before she leaves, she tells Sharon that she wants the whole family at the hospital this afternoon. At the hospital, Ronnie is determined to stay despite Phil’s protests but it dawns on her the family are not coming. Ronnie stays while the doctor delivers some bad news. Realising that he may not see another Christmas, Phil wants a drink but Ronnie is firm, he is not going to die. Not happy with the family, Ronnie heads to the Mitchells but she is surprised when she can’t get in – Sharon has changed the locks as Phil is no longer wanted there. Things get tense and on seeing the commotion, Honey takes Ronnie home.

Desperate for Ronnie to say goodbye to Joel, Honey arranges some flowers to take to his grave but when they return they receive a knock at the door – it’s Hannah, Joel’s daughter, and she accuses Ronnie of killing her parents.

Wanting to take Arthur to see Stacey, Martin asks Shabnam to go with him but they both make up excuses. Shabnam tells Kush that she can’t go on living this lie but Kush drops a bombshell – he wants them to move. Realising he is serious Shabnam agrees to talk about it later but when Kush fails to show, Shabnam realises that he is with Martin at the hospital. When Kush returns, Shabnam tells him she knows deep down that seeing Arthur is killing him. She urges Kush to be honest and be a part of his son’s life. Despite Kush’s protests, Shabnam tells him she’s leaving him.

With Kush’s support, Martin takes Arthur to visit Stacey. At first it takes Stacey a while to connect with her son, leaving Kush to fear that she may blurt out the truth.
​
Shirley is alarmed when Jade asks questions about her dad as William has been calling him a rapist. When Billy later storms into The Vic shouting the odds as Jade hit him, Shirley realises that Jade has taken her comments literally.

Determined to make a go of their pop up restaurant in the laundrette, Nancy tells her parents that she is handing in her notice at The Vic to focus on the business. Their evening goes well until Denise and Claudette come to blows, but as Nancy looks at what they have achieved; Tamwar admits he hasn’t handed in his notice leaving Nancy annoyed.

Denise asks Carmel to go for a drink with her as Kim wants a night alone with Vincent but Carmel is keen to go to Tamwar and Nancy’s night. However it soon becomes clear that Carmel just wants to see Masood and Denise is the third wheel. 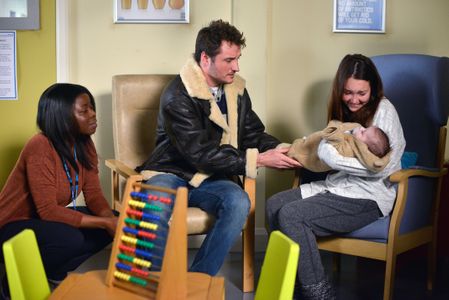