Lauren’s world begins to spiral. Max and Abi quickly grow suspicious of her behaviour and after a confrontation with Lauren, Max asks Stacey to talk to her. Max is even more concerned when he hears Lauren almost fainted and finds her at Stacey’s.

Lauren reveals the truth to Stacey about what’s really going on but they are interrupted by Max arriving and demanding answers. As she leaves, Stacey looks at the used pregnancy test left by Lauren. What does it reveal?

Dot is put in an impossible position when Nick pushes her into getting him drugs. Fatboy grows suspicious of her behaviour and after finding a piece of paper from Nick, follows her and catches her leaving some dodgy flats. Is doesn’t take Fatboy long to realise she is covering for her son but how far has Dot gone?

After learning the truth about the extent of her money troubles, Alfie has a plan to help and invites Kat to lunch.

Roxy and Charlie arrange to see Ronnie’s doctor where they learn she could potentially suffer brain damage even if she does wake up. Back home, a furious Roxy confronts Charlie and asks him why he didn't push for answers and better treatment – does he want Ronnie to die?

After being mocked for his drunken antics, a hungover Ian tells Jane he is organising a pre-wedding party to restore the Beale name. 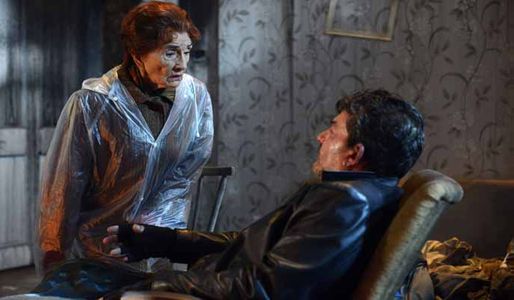 Eastenders 02/02 - Dean’s world crumbles around him

Eastenders 10/03 - Events at the Hubbards’ spiral out of control

Eastenders 10/02 - How Will Whitney's Latest Plan Go Down With Lee?