Eastenders 10/04 – Mick is suspicious of Lee

Peter plans a romantic trip to The Shard with Lola, but her insecurities come out when she can’t find anything to wear. Abi and Jay join them but Peter and Jay begin to argue about Lola and she runs for it. Jay catches up to her and almost kisses her, but she runs away only to be knocked down by Ronnie at the same spot where Danielle was killed.

Carol’s good news about her cancer is overshadowed by the guilt she feels for giving her daughter the faulty BRCA gene.

Roxy decides to turn the table to Ronnie and sets her up with Charlie. Ronnie worries about Roxy’s relationship with Aleks as they arrange to meet up again, and forces Aleks to cancel their plans. Ronnie feels bad when Roxy is upset and so cancels her own date to cheer her up.
​
Mick becomes even more suspicious of Lee when he sees him behaving oddly. Lee is discovered when Mick catches him preparing to abscond from the army with Stan’s help. Lee comes up with a story as to why he can’t go back, but Mick is not convinced. 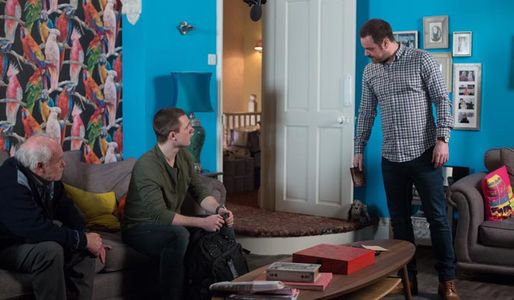 Eastenders 10/07 – Do Mick and Linda want the same thing?