It's Jim's 80th birthday so Lauren throws a party for Dot in his honour.

Despite being stressed by the pressure of organising it she assures Max it'll be fine to have alcohol.

Dot arrives for the party and Lauren accidentally drops a bottle of champagne after Joey brushes her hand.

Sad that none of Jim's children have been to visit, Dot gets upset and Max, Jack and Carol promise to visit more.

Meanwhile, Joey is reassuring Lauren and she asks him if he still loves her.

They almost kiss but Kirsty walks in and he takes the chance to run away.

Whitney's back at the community centre and gets things back to normal, which includes telling Sharon that Dennis is still up to his fibbing tricks.

Janine rubs her Danny triumph in Michael's face but he soon realises it's all for show and makes sure to let her know.

Ronnie gets into an argument with Roxy over Amy - he's not getting pushed out of her life now that she's engaged. 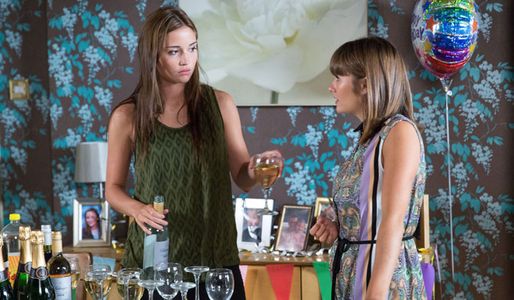 EastEnders 08/08 - Lauren is back in the square

Eastenders 28/08 - Lauren Breaks Down Over Her Wedding