Denise is left wondering if she has made the right decision about Jordan now she is faced with the reality of the situation. Jordan runs into his old friends Abi and Ben in the café and is surprised to find out they are in a relationship and things quickly get awkward.

Ben prepares dinner for Abi as he gets ready to break it off. But his plans are scuppered when Abi finds a present that Ben has hidden and assumes it’s for her. She opens it and receives a shock when she sees what it is and realises it must be for Paul. A devastated Abi rushes to The Vic and confides in Babe. Later on, Abi has a shock for Ben.

Martin, who is in better spirits, tells Bex he has everything under control and that he’s not going to visit Stacey in hospital but Bex worries about her dad. Later on, Bex convinces Martin otherwise and he takes Arthur to visit Stacey.

Meanwhile romance is blossoming for Jay and Linzi after she agrees to go on a date with him and sets about to surprise her for a pre-valentines date, but after failing to book a table he transforms the Arches 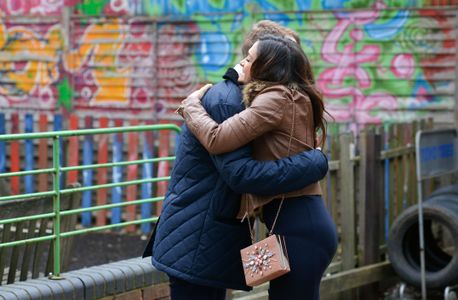 Eastenders 11/2 - Patrick decides to move back in with Denise