Patrick and Carmel grow concerned when Denise locks herself away and tries to distract herself from dealing with her pregnancy. Carmel tries to talk to Denise telling her friend that she should consider all her options but Denise shuts the conversation down and instead asks Carmel about Masood. Wanting to help the pair, Denise sets them up and the two are left alone for a romantic dinner. The pair discuss Masood going travelling and he admits he’s starting to doubt his decision. When the topic of their relationship comes up, Carmel tells him there’s still time to make something of their relationship and Denise and Patrick later return to find them kissing.

Sonia’s frustration continues when she is left to care for Sylvie but Dot encourages her to put herself and Bex first for once. Meanwhile, Jane and Ian continue to drift apart when Ian struggles to talk to Jane who wants things to return to how things once were between them. Sonia arrives to ask Ian if Bex can have a day off work but after his snappy response, Jane confides in Sonia about her relationship – Ian is avoiding her. Back home, Sonia receives an exciting call…

Carmel pulls up Buster for breaking the rules on the market. Lee questions his abilities as a father but after hearing Whitney’s own fears, becomes more positive.​​ 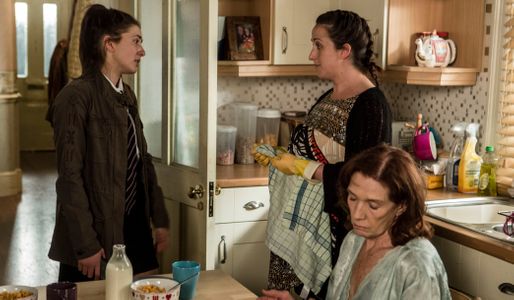 Eastenders 29/9 - Tensions Continue To Build At The Fowler's