Eastenders 13/01 - Charlie is horrified at his mother’s revelations

Charlie is horrified at his mother’s revelations and when he quizzes her about how long she has known, Yvonne lies – not wanting to let on about the part she played. Charlie confronts Nick who swears on the baby’s life that Yvonne is lying and as Nick slowly twists the situation Yvonne desperately tries to prove that she’s telling the truth. Who will Charlie believe?

Elsewhere, Aleks comes to Charlie in a panic; Ineta has disappeared and she has taken the baby with her. Charlie springs into action and searches the Square looking for them. Wanting to get away, Nick quickly packs his bag however he suddenly notices smoke coming out of the kitchen - Yvonne has burned Nick’s money.

Having finally found the baby and Ineta, Charlie decides it’s time to take responsibility and bring his son home.

Dean brings Sylvie to the Community Centre having found her on the Square. In her confusion Sylvie is convinced that Dean is Stan. Stan and Tina find them and Stan explains that she is Dean’s grandmother. Back at the dance ‘Unforgettable’ by Nat King Cole starts to play and Sylvie suddenly recognises Stan. The two dance together and kiss. However Babe bursts in, splits them apart and the past is revealed. Back at The Vic, Stan asks Dean to stay and tells him that he doesn’t believe Linda’s story.

Ben confides in Jay however misreading the situation, Ben tries to kiss him. Jay later finds Ben all over Abi. Ben’s clearly trying to prove something to himself however before Jay can tell Abi what happened earlier, Ben blurts out what Max has done.
​
Shabnam follows Stacey out of the pub, leaving her bag behind. Kush takes it to her and she overreacts to a joke that he makes about it, telling him and Stacey to leave. Once alone she rifles through her bag, and finds a newspaper cutting. Her secret is still safe… 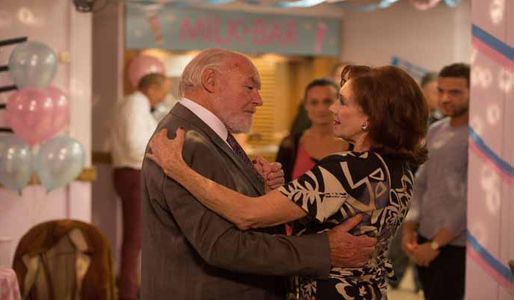