Eastenders 13/04 - The Carters are rocked by Stan’s death

The Carters are rocked by Stan’s death and when Shirley goes to visit Dean in prison, Mick and Shirley drift even further apart. As Buster breaks the news about Stan to Dean, it’s clear he’s struggling to cope inside and Shirley rushes out. Back at The Vic, an angry Cora arrives having gone to the hospice unaware Stan had passed away and starts throwing accusations causing Mick to snap. Later on, Tina pleads with Mick to make amends with Shirley and he promises to try. Mick raises a glass for Stan but a drunken Shirley soon causes a commotion - has she gone too far this time?

Elsewhere, Aleks has forgotten about Ineta’s birthday and enlists Roxy’s help in throwing a last-minute party. Although off to a great start, Roxy is thrown when Marta arrives and causes friction between her and Aleks. Meanwhile, the tension continues to build between Roxy and Charlie when he arrives. When alone, Charlie comes clean about how he really feels leaving Roxy conflicted. She later visits Charlie but they are interrupted when Aleks arrives and tells them Ronnie is talking and wants to speak to Roxy.

Over at the Jacksons, Carol and Sonia come to terms with Jim’s death but the pair clash when Sonia reveals Martin has lost the house. Later on, Carol opens up to Sonia and says she’s going to plan Jim’s funeral despite how difficult he made her life. In Les’ absence, Pam asks Billy to step up as acting-manager and plan the two funerals.
​
Masood worries about Tamwar’s love life and reaches out to Aunt Fatima for help but Shabnam is concerned when she gets the wrong end of the stick. 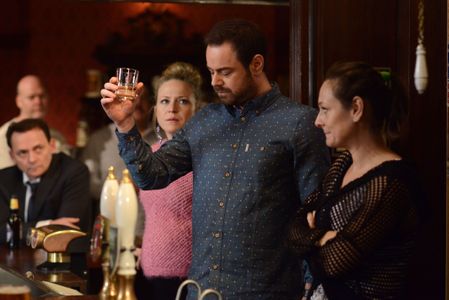