by Emmy Griffiths Published on 6 May 2014
© BBC Pictures

Jake’s arrest sends shockwaves through Walford. Lauren confides in Peter about her visit to the police, who decides to spend some time at Ian’s, pushing Lola further away. Later, Peter spends time with Lauren and the pair find themselves in a compromising position. Meanwhile Phil visits Ian in an effort to help him get his life; the two enemies bond. Phil leaves the restaurant with Ian’s words ringing home and decides he wants to visit Ben. Later that day, Ritchie visits Phil and stuns him with some news…

As David and Carol’s wedding looms, David sends Bianca back to the shop to buy her mum the expensive dress she wanted. Back at the house Liam confronts him about what he saw with Nikki but David denies it, telling Liam he got the wrong end of the stick. Liam remains unsure and worries that Carol might be making a mistake and considers telling her everything.

At The Vic, Shirley and Stan have a heated argument and Shirley attempts to chuck him out. She is stopped in her tracks however when Nancy collapses and has a fit and Shirley witnesses her dad’s softer side as he takes control of the situation. After receiving the credit for Stan’s actions Shirley agrees to let him stay but her day is about to take an unexpected turn when an estranged Dean arrives at the pub… 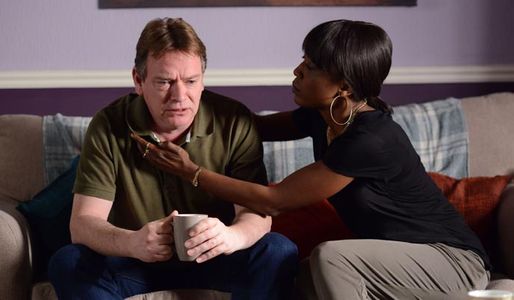