It’s the day of Cindy and Liam’s prom and Cindy is touched when Carol offers to help her get ready. After Ian refuses to visit Cindy, Bobby takes matters into his own hands and invites Cindy to the Beales. A reluctant Cindy arrives and is surprised by Ian’s kind comments but things soon go downhill when Ian reveals that Jane is paying Carol to look after Cindy causing a huge argument. Upset, Cindy returns to the Butchers and confronts Liam and Carol about their betrayal. Feeling alone, Cindy heads to The Albert and asks two men to buy her drinks. Liam soon arrives looking for Cindy but is shocked when she gets in a car with them. Worried, Liam rushes to tell Ian and Jane who quickly call the police. Meanwhile, Cindy begins to have second thoughts about her decision as it appears she could be in danger...

Worried about her brother, Nancy encourages Lee to talk to Mick about his problems and heads out with Linda to give them some space. A brave Lee finally goes to talk to Mick but struggles to find the right moment when Mick has his hands full with Ollie and Lady Di. The day gets worse when Lady Di leaves an unwelcome present under Ollie’s cot. As Mick debates what to do, Lee realises he’s left the door open and Lady Di is nowhere to be found causing Mick to snap at Lee. A worried Lee does his best to track down their beloved dog but eventually finds her in the allotments. As Lee once again tries to talk to his dad, Lee finds himself supporting Mick as he shares his own fears. Nancy later returns home and is angry to hear that Lee has yet to speak to Mick but as she tries her best to force him, Lee pushes her and she falls down.

Later on, a reluctant Stacey assists Shabnam at a birthing class and tells her best friend she’s pregnant. After some encouragement from Shabnam, Stacey speaks to Martin about what she wants. 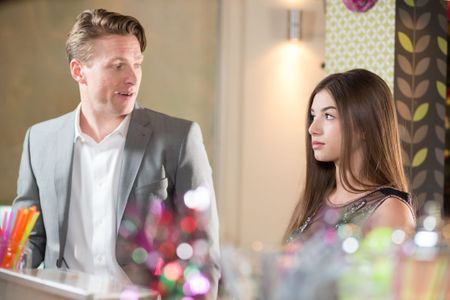 Eastenders 21/07 - Carmel Questions Max, But Will She Believe Him?

Eastenders 13/07 - A Nervous Bex Prepares For Her Performance