Johnny struggles to come to terms with everything he’s missed and after conversations with Nancy and Shirley, he soon realises just how much his family have kept from him. Alone, Johnny breaks down but when it comes to the Carter family photo that Mick has organised, he paints on a smile. Later on, Johnny finally snaps and tells Mick that he blames him for everything.

As Stacey prepares for the family lunch, Martin and Kyle worry she’s taken on too much but it’s not long before Jean and Ollie arrive. Things get off to a turbulent start when Jean insists Kyle is lying about who he is and at The Vic, the atmosphere remains fraught. Stacey tries to lift the mood and reveals the date of the wedding but a seething Jean refuses to celebrate and continues to interrogate Kyle. Feeling caught, Kyle reveals the truth about his past but Jean refuses to believe him. Horrified by her mum’s words, Stacey follows her home and defends Kyle. Later on, Belinda drops a bombshell...

Jay meets with Linzi and lets slip about what happened with Louise. Seething, Linzi warns Louise to stay away. With Jay’s words on his mind, Ben invites Paul for a drink and tells him he’s fed up of lying about who he is. 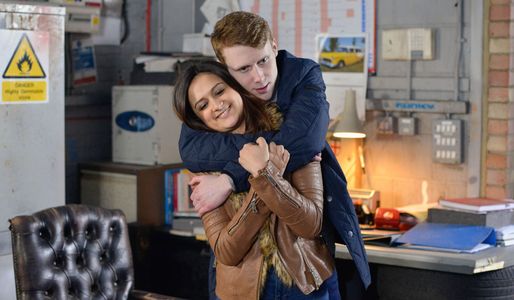