It’s the day of Bobby’s hearing and Jane and Ian see a glimmer of hope when Ritchie explains that ifBobby pleads guilty, he could be home by the end of the day. Sharon reels from the news and at the Beale’s, gives Ian a reality check – Bobby deserves to go to prison. Kathy overhears the comment leading to an argument between the pair causing Ian to snap.

Mick and Linda take Ollie for his check-up but Mick grows frustrated by the lack of answers and storms off. Meanwhile, Belinda receives a letter from Neville filing for divorce and asks to meet him to try and sort between them. With Neville on his way, Belinda turns to Mick for help and at the café, they try and negotiate a deal. Mick quickly sees through Neville’s lies and takes matters into his own hands. A buoyed Mick returns home but him and Linda get a shock when Sylvie arrives.

​​Bex tells Martin that nothing is going on with her and Shakil but he later finds them together. WithMartin angry, Bex snaps and tells him he better get used to it. Steven tells Lauren he’s sticking around for now and after a worried Patrick talks to Kim about Dot Kim comes up with a way to distract Dot from her worries and enlists her to take part in the Salsa show. 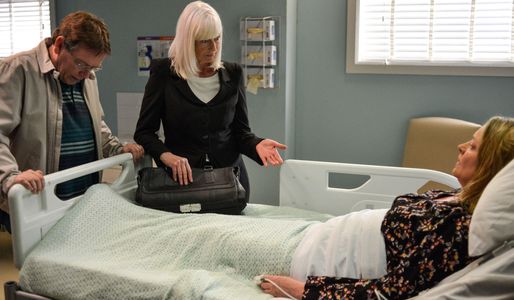 Eastenders 14/02 - Is This The End Of Whitney And Lee's Relationship?