Eastenders 15/03 - The Carter family are thrown into panic

The Carter family are thrown into panic when Ollie stops breathing. With the ambulance on the way, Linda manages to revive him but the family watch on in horror as Ollie suffers a seizure. The paramedics arrive and rush Ollie to hospital. At the hospital, the doctor begins to ask questions about Ollie’s health over the last few days and Mick and Linda begin to wonder if his fall the day before could have something to do with it. Their fears are later confirmed when a CT scan reveals Ollie is suffering from bleeding in the brain which is likely to have been caused by a severe blow to the head. Mick snaps and blames Nancy and Lee but Linda reminds him she’s the one who said Ollie was fine. After Shirley, Buster and Tina arrive, the doctor tells the family that it is protocol to contact Children’s Services leading Linda to reassure Lee and Nancy it’s not their fault. As everyone reels from the news, the doctor admits it is possible Ollie could have brain damage.
​
Elsewhere, Phil is back to his old ways and denies telling Ronnie he needs help and doesn’t want to die. As Phil goes to bed, Ronnie hands him a support group leaflet for alcoholics. 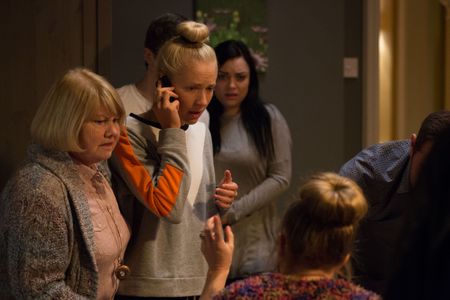