Carl is putting the pressure on Ian - he wants a permanent table at Scarlett's and another instalment.

Lucy still refuses to bail him out and tells him his only option is to sell the restaurant and get Carl and Janine out of his life for good.

Despite agreeing he tells Peter he has no intention of selling up.

He takes advantage of an upset Lucy - distraught after Joey tells her their relationship is over - Ian gives her a form to sign off on.

Little does she realise she's just signed the business back over to him!

Jean continues to struggle with her guilt and in an effort to avoid the restaurant returns to her allotment, where she blows up at 'helpful' gardener Ollie.

Kirsty is trying everything to get into Max's good books and even goes to Abi for help.

She warns Max to steer clear and he tells Kirsty they've got no chance of getting back together.

Patrick finally calls it off with Betty - it's Cora he wants to be with. 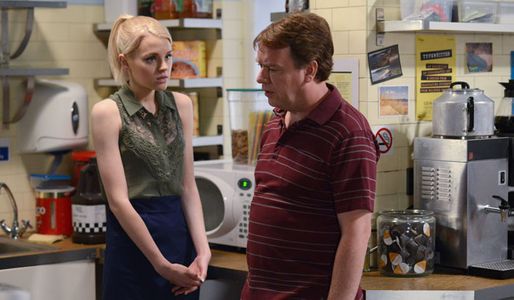