Ben reels from Abi’s bombshell and remains torn on what to do. Worried for her son, Kathy tells Ben he needs to make a decision. In The Vic, Ben turns to Paul for support but they are interrupted by Whitney who puts doubts in Ben’s mind as to whether or not Abi is telling the truth. Ben decides to confront Abi but she angrily insists she’s pregnant and storms off and later shows him the positive test to prove it. Ben asks Ronnie for help but when an unsupportive Phil gets involved, Ben decides he’s going to be a better dad than Phil and tells Abi it’s her and the baby. Outside, a gutted Paul spots Ben and Abi kissing and Ben removes his bracelet that Paul bought him.

Worried about Stacey, Martin takes Arthur and Lily to visit. Back home, Kush realises the toll it’s taking on Martin and encourages him to go out for the night. As the pair get ready, Martin insists on taking his phone in case a mother and baby unit call but Kush secretly leaves the phone behind. At The Vic, Kush’s drinking gets out on control and Martin is forced to take him home. However when they return, Martin spots the phone and realises he’s missed a call from a hospital to say they have an available room but by the time Martin calls them, it’s gone. Fuming, Martin punches Kush.

Despite her family’s pleas, after receiving some flowers from Lucas, Denise secretly goes to visit him and ends up telling him about Jordan. Back home, Denise tells Jordan what happened and asks him to go and visit his dad in prison but he refuses. However he later tells Patrick he’s going to tell him to stay away but Patrick demands he doesn’t go. Elsewhere, Honey invites Pam out for a drink but when she arrives to find Les waiting, she quickly sees through the plan and storms out. However Kathy follows and convinces Pam to talk to Les. At home, Kathy gets a shock when finds Gavin waiting for her. 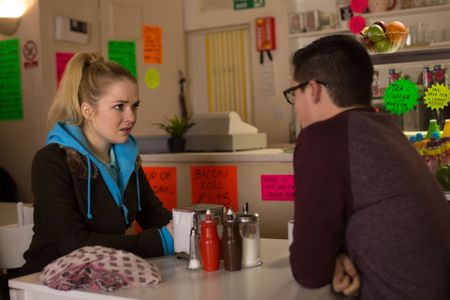