Furious, Nancy storms upstairs and begins to pack her bags. Dean doesn’t want to cause any trouble but Stan and Shirley tell him he’s staying. Lee talks to Nancy and convinces her to stay for Mick and Linda’s sake and do as her mother does - put on a smile for the punters and heads downstairs. It’s Ladies’ Night and after a slight hiccup, the entertainment booked by Shirley finally arrives.

The Vic is busy and when Dean heads behind the bar to help, it all becomes too much for Nancy and she heads outside. Shirley follows and after explaining that she can’t let Dean down again, Nancy retaliates by saying that they can’t keep acting like nothing has happened. Nancy admits she thinks Linda and Dean must have had an affair for Mick to react that way and Shirley is shocked when Nancy reveals that she knew that Dean and Linda kissed.

​Shirley promises Nancy that she won’t let Dean behind the bar again if she comes back inside. After a very successful night, Dean holds a toast to Shirley, the Queen of The Vic.

Fed up with all the talk of happy marriages, Sonia soon decides she has had enough and Tina follows her out of The Vic. Sonia and Tina comfort each other as they talk about Sonia’s divorce from Martin and the situation with Sylvie. There is a charged moment between them however Sonia moves off asking Tina to tell Carol she has gone home.

As the drink flows, more secrets are spilled and the girls are shocked when they hear that Fatboy and Denise slept together. However Fatboy soon disappears and is later discovered getting close to another female Walford resident.

Shabnam heads to The Vic with a tarted up Stacey and Kat and watches Kat disapprovingly as she flirts with Kush. After a fun night with even Shabnam enjoying herself, she tells Kush that she will take Masood’s place in the race and will run rings around him. 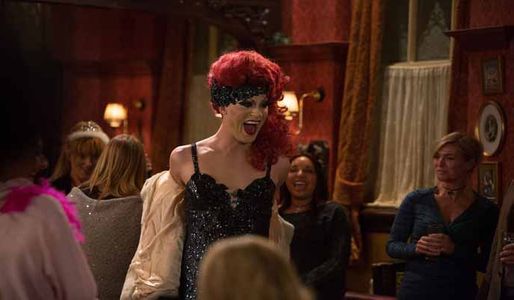