Shabnam's friends and family are left stunned by Dean's revelation and he is quickly sent on his way. Back home, Shabnam confronts her father about how Dean discovered the truth leading to a huge argument and she decides she doesn't want Masood at the wedding. With tensions running high, Shabnam tells Kush she can no longer live with Masood but when he refuses to leave, she finds herself staying at Stacey's. Dean insists on visiting the foster family tomorrow despite Shirley's pleas.

Elsewhere, Ronnie braces herself for a romantic night with Charlie however the evening takes a turn for the worse when she receives a phone call from Sharon to collect a drunken Roxy. Ronnie decides to ignore the request. However as the pair settle down for the night, Ronnie soon finds herself alone when Charlie is called to bring Roxy home. When Ronnie hears Roxy arrive home with a man she thinks her worst fears have come true.
At the Albert, Sharon's singles bingo is a huge success but things aren’t going as well for Kim but can her secret surprise save her?

Carol and Buster bond at the singles bingo night but the night takes an unexpected turn when Shirley misinterprets the situation. 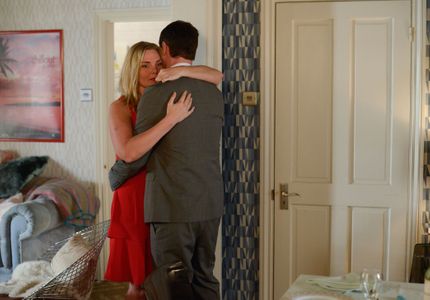