The residents of Albert Square are shocked to wake to front page news revealing there is a new suspect in the Lucy Beale case. Outside, a stunned Ian struggles to come to terms with the news and heads home to decide what to do. Overwhelmed, Ian heads to the restaurant but Sharon soon arrives and encourages Ian to get to the bottom of what’s going on. Ian quickly returns home and tells Jane and Cindy they can’t keep running scared and need to ask the police about the new evidence. However, it is not long before the police arrive in Albert Square, determined to make an arrest…

Max learns Carol is planning to sell Jim’s motorbike for the money and feeling guilty, suggests the pair go out for a final ride together. Carol is initially reluctant but after the pair come to blows with Ben, agrees. Meanwhile, after a tip-off from Ritchie, Phil tells Ben the police will be in the Square today and gives him the task of getting rid of one his dodgy motors. However with Paul playing on his mind, a distracted Ben instead decides to show off and takes the car over to Blades with embarrassing consequences. Ben later meets with Paul and the pair share a kiss.

Dean sets Paul and Lola the task of a ‘cut and colour’ to decide who gets the job at Blades. Lola is quick to recruit Jay but Paul gets more than he bargained for when Pam agrees to take part… Elsewhere, both Max and Kush discover Stacey’s baby secret after putting two and two together. Pam and Les worry about the future of their business but Pam has an idea up her sleeve to get Paul interested in the business. 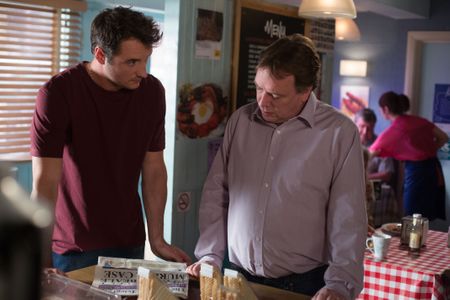