Jean is feeling miserable about Ollie when he turns up with flowers.

Her hopes seem dashed when he tells her he's leaving.

He tells her he loves her and she's close to telling him she'll go with him when Kat and Roxy interrupt.

The two fight over what Jean should do and Jean realises Kat's arguing for her to stay because she needs her.

Jean lets Ollie leave and the two are heartbroken.

Lola is annoyed with Phil for letting Ronnie take charge of the business.

When Lexi becomes ill at her child-minders they call Phil's house - Ronnie - to come and collect her.

Ronnie is overwhelmed and scared and Lola and Billy realise this when they rush home to find her anxiously looking after Lexi.

They reassure her it's fine - they're all family.

Abi and Lauren continue to argue over Max with Abi adamant that their Dad is innocent.

They come across some of his legal bills and disagree again - Lauren thinks they need to help while Abi thinks he should sort out his own mess.

Things are awkward between Jack and Ronnie after they spent the night together, meanwhile Janine and Michael agree for once when they declare she needs to be kept away from Scarlett.

Elsewhere Sam stands Ava up and Lucy feels uncomfortable about her latest task from Janine. 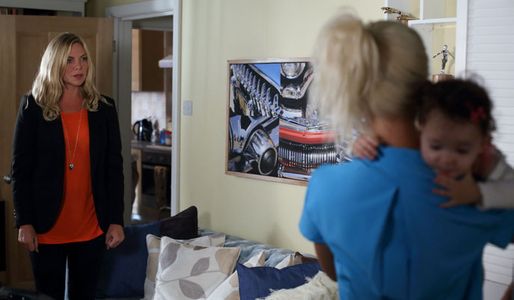