A terrified Kathy warns Gavin she’ll call the police if he doesn’t leave and reminds him it’s over between them. However she is taken back when Gavin reveals he’s been on holiday with Sharon and needs Kathy to pass on a message to her after it ended badly. As the pair talk, Dot arrives to play cards but quickly realises who Gavin is. Alarmed, Dot is protective of Kathy and Sharon and tells Kathy not to listen to him. After Kathy shares some stern words, Gavin breaks down and begins to cry, much to Kathy’s surprise. With Dot seeing through his efforts, she soon goes leaving Gavin to beg Kathy to pass on a message to Sharon. Gavin eventually wins Kathy round and she agrees to talk to Sharon.

Pam and Les continue their date but when Les brings up the past, an angry Pam attempts to change the subject and reminds him he’s ruined their past. Determined to win the love of his life back, Les reminds Pam they’re still the same people and begs her for a second chance. Despite his efforts, Pam tells Les she can’t get the image of Christine out of her head and storms out - it’s over. After overseeing the commotion, Babe comforts Les but he quickly realises she’s making a move on him and tells her to back off. After telling Billy his date with Pam was a success, Les takes drastic action to get Pam back but will his plan work?

Outside, Martin and Kush continue to fight and when they eventually calm down, Martin grows suspicious of Kush’s behaviour - what’s really going on? Meanwhile, Tina cooks a romantic meal for her and Sonia but her plans fall apart when Sonia arrives with an injured Martin. Sonia promises to speak to Kush for Martin. Back inside, a fuming Tina confronts Sonia over not spending much time with her.

At The Vic, Whitney’s suspicions about Abi continue to grow when she overhears Babe comforting her. Later on, she confronts Babe. 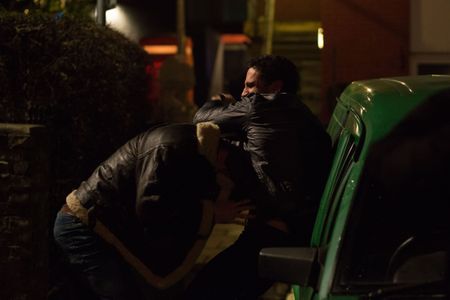 Eastenders 16/5 - Kathy and Sharon offer their support to Phil

Eastenders 11/2 - Patrick decides to move back in with Denise