Eastenders 17/02 - Peggy Mitchell is back in Albert Square

Peggy Mitchell is back in Albert Square but before she goes to do what she came for, Peggy cannot resist taking a moment to visit her beloved Queen Victoria where she meets the current landlord... Before long, Peggy heads off on her mission to Dot’s but she is stopped in her tracks by the state of Dot …

It’s the night of Ian and Jane’s wedding but Lauren is fretting as she now knows details about what happened to Lucy. Knowing the truth has to come out, Lauren takes matters into her own hands and she leaves a wedding card with a message inside…

Meanwhile, Max grows troubled about Lauren’s behaviour and after learning the truth from Stacey, he desperately searches for his daughter – does she really know what happened to Lucy? When he finally finds Lauren, she immediately storms out and gets into a cab before he even has the chance to talk to her. Max is left worried – Lauren can’t reveal what she knows about Lucy.

As the ladies get ready for the wedding at Blades, the guys have some pre-wedding drinks over at The Vic. However it’s too much for Ian, who runs outside worried that he shouldn’t be happy with everything that has happened with Lucy. After reminiscing about their past, Ian tells everyone it’s time to go to the wedding but is taken aback when he discovers how Alfie plans to get him there.

As everyone waits at Beales restaurant for the ceremony, Ian heads into the kitchen to find Phil who is desperate to talk to Ian. What does Phil have on his mind that is so important?

Elsewhere, it’s the day Roxy and Charlie have been dreading when the doctors turn off Ronnie’s ventilator but will Ronnie finally wake up?

Meanwhile, there is a new face on the Square (played by Richard Blackwood) but who is he and why is he in Walford? 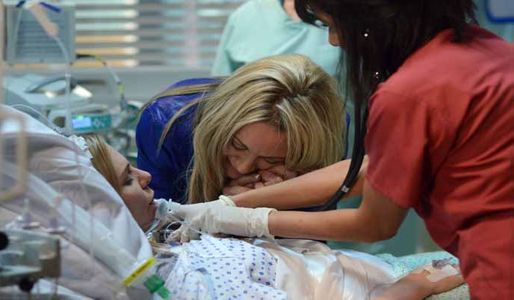 Eastenders 30/03 - Phil Mitchell is back in Albert Square