Eastenders 17/03 – Kat is riddled with guilt

Kat is torn over whether to give fake evidence at Janine’s trial. Alfie tries to convince her not to, but after a discussion with Mo she is otherwise persuaded.

Although he tells Carol he’ll go to court to support Alice for her, Max actually sneaks off to see Stacey. Stacey pressures him to get Kat to change her mind but Max lies, telling her it’s impossible. He comforts Stacey and an old flame reignites, leading the two to passionately kiss. However, Stacey makes a run for it when Max returns from the bathroom.

Ronnie takes Phil to visit Carl’s brother Adam, who has been beaten up badly.

Peter finds out about Lola’s new business venture as a nail technician, and he assumes it’s to fund a social care course. Lola keeps her true feelings to herself, but Jay notices something is going on and encourages her to follow her dreams.

A problem that Alfie caused in Australia catches up with him when someone arrives asking for him. 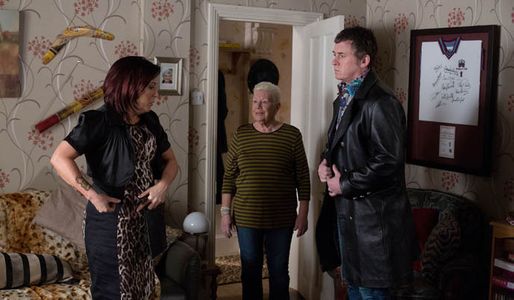