They don't find him but Jean does - he's in the allotment and tells her he can't leave without her.

She speaks with Kat and has her blessing to move away with him.

A tearful Kat has Alfie to lean on as Jean leaves the square.

Michael tells Roxy and Alfie that Ronnie and Jack are back together as well as letting Carl know she's a tricky character.

Carl tries to test this but Ronnie shows no weakness.

Meanwhile Roxy thinks she may be pregnant and is disappointed when she's not.

She tries to talk to Alfie but he's preoccupied with Kat's issues so she turns to Ronnie.

Abi and Lauren present Kirsty with suitcases - it's time she moves out.

Abi points out that their issues are mostly her fault - while Kirsty defends herself Lauren is caught between them and suggest maybe she stay - Abi can't believe it!

Lucy is anxious about visiting tenants to tell them about rent increases but is quick to bite Ian's head off when he tries to advise her.

Meanwhile Ava's not happy about being stood up and gives Sam a piece of her mind when he finally arrives.

He shuts her up quickly - he has news. 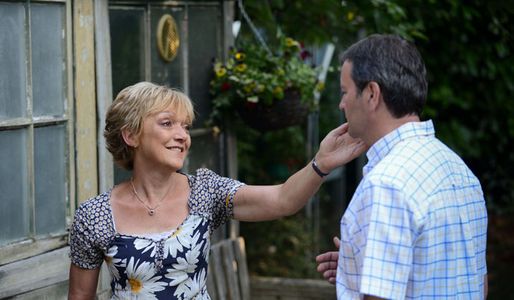