Phil’s friends and family continue to question his whereabouts but Louise soon arrives with worrying news – Phil is in hospital. Still fuming about recent events, Sharon refuses to believe Louise and tells everyone to leave but Kathy and Shirley feel they should go to see him. In the café, Louise confronts Sharon and shares a harsh reality with her convincing Sharon to give Phil the benefit of the doubt. At the hospital, Kathy and Shirley are surprised to see Sharon there who reveals Phil’s already discharged himself and Louise was telling the truth – his liver is seriously damaged. They eventually find a drunken Phil in The Vic but with Nancy refusing to serve him, he causes a commotion. Fed up, Sharon leaves but Shirley eventually gets Phil out of the pub. After fetching Dennis from the hospital, Sharon makes a surprising decision.

Martin continues to grow concerned about Stacey’s erratic behaviour. Meanwhile, Alfie spots an obituary for Charlie in the paper from all of his family except Kat. Mo later arrives and tells an upset Kat that she’s not welcome at the funeral and Kat agrees she should stay away. However the news doesn’t go down well with Stacey who shares some encouraging words to Kat, much to Martin’s relief. With the pressure growing, Martin turns to Sonia for help but when they spot a dishevelled Stacey on the Square, Sonia quickly realises all is not well. Meanwhile, an emotional Kat visits Charlie to say goodbye and decides she has to be at the funeral no matter what.

Tensions are high in The Vic when Mick and Linda decide to stay on their honeymoon longer leading Aunt Babe to suggest Nancy should take over running The Vic from Shirley. Although initially unimpressed by the idea, Shirley later has a change of heart and tells a hesitant Nancy she should do it. 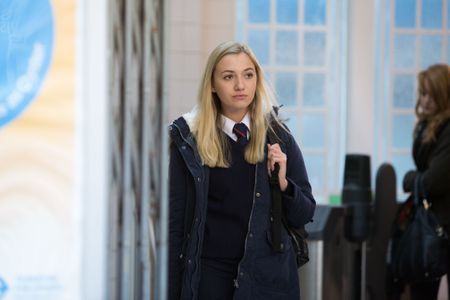 Eastenders 11/8 - Tensions continue to simmer for the Mitchell family