Denise’s optimism about Patrick’s progress is concerning Ian and the two go and visit him at the hospital. Unaware of the tension between the two men Denise leaves them together and goes to find a Doctor. Denise returns with the good news that Patrick can return home but Ian hatches a plan. Later, Ian admits he’s spoken to Kim and Anthony who both feel Patrick would be better off in a home.

Jay promises to move with Abi when she goes to university. Meanwhile, Max invites the family over for a meal to celebrate Abi’s success. However, Max is annoyed when Dot brings Charlie and things take a turn for the worse. After offending Dot and Charlie, Max then tells Jay he can’t go with Abi. Frustrated with Max’s attitude, the guests leave the meal.
​
Whitney tells Lauren she wants to take things slowly with Lee. Lauren reveals she wanted to do the same with Dean but that didn’t go to plan as the pair spent the night together. After some advice from Carol, Whitney has a change of heart. Later, Dean upsets Lauren when he tells her their relationship is casual but quickly changes his mind when he sees her reaction. Dean then goes to The Vic to make Linda aware of his and Lauren’s relationship. 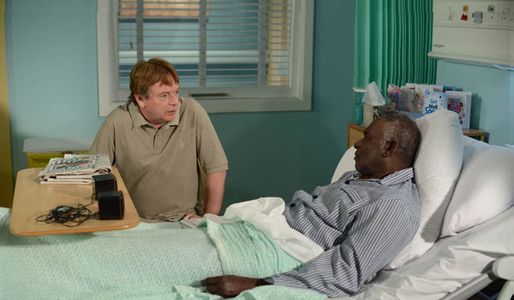 EastEnders 08/11 – Ian is cracking under the pressure