Worried about her relationship, Sonia attempts to make amends with Tina and suggests they spend the afternoon together. Things grow tense however when Martin pleads with Sonia to look after Arthur so he can go and visit a mother and baby unit in Bristol but she puts her foot down and refuses. At the café, Tina begins to talk to Kim and gets a suggestion to help her spend more time with Sonia. Meanwhile, Sonia talks to Kush and he starts to open up about everything. Just as they begin to discuss Arthur, Tina walks in and is frustrated to see Kush is spoiling their afternoon together. After Kush leaves, Tina opens up to Sonia and says she’s worried their relationship is falling apart. Sonia promises her it’s okay and Tina surprises her with a gift… As the pair rebuild their relationship, Sonia ignores a call from Martin but is later shaken when Bex arrives and reveals Martin and Arthur have been in a car crash. At the hospital, Stacey tries to be positive about her review the next day.

At the Mitchells, Kathy confronts Sharon – she knows the truth about Gavin. Despite Sharon’s reluctance, Kathy convinces her to stay in control and meet with Gavin. At Beales, Gavin apologises for what happened and tells Sharon he wants to be a good father. What will Sharon decide?

Ben insists on coming to the doctor’s appointment. Abi tells Ben the baby is due in October. 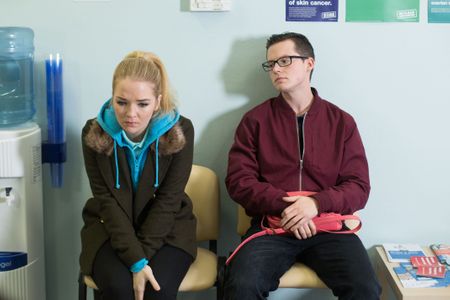