It’s Shirley’s turn to give evidence and after opening up to Kathy and Denise about her worries, she heads to the court with Denise by her side. Outside, Shirley admits to Mick that it didn’t go well at the trial and blames herself for being a bad mother.

Shirley joins Roxy in The Vic where they learn the Jury’s verdict will be revealed tomorrow. However Linda fears Dean may be found innocent.

Elsewhere, Buster grows frustrated when he feels pushed away by Shirley but his mood picks up when Kathy invites him to a family dinner. Jane clocks on that there is something going on and warns Kathy to be careful.

Carmel starts to have doubts about taking on the market enforcement officer job but Kush assures her she’ll be great.​​
​ 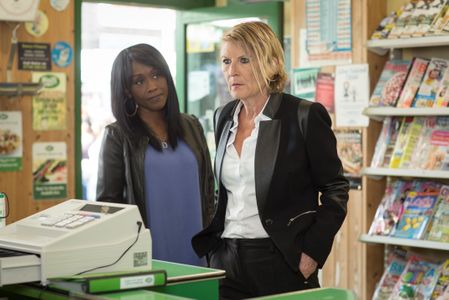 Eastenders 18/08 - Carmel's Ready For Her Holiday But Max Has Other Ideas...