Eastenders 19/01 - Jack Asks Phil To Speak At The Funeral

Whitney joins Stacey on a girls night out but things grow fraught between her and Lee after he decides to join them and learns about an earlier incident.

Whitney soon finds herself at the end of a drunken Lee’s wrath and back home, is left shocked when he points the finger at her for everything that’s happened. Fed up, Whitney seeks refuge at The Vic but as Lee does his best to get Whitney to return home, a stern Mick sends him on his way. Upset, Whitney questions if she is to blame and reveals what Babe said to her. However Mick assures her none of this is her fault. Is this the end of Whitney and Lee?

With Jack still struggling to get through to Ricky and Amy, Glenda suggests it might be best if they don't attend the funeral but Jack insists they should be with him. Jack pays a visit to the Mitchells and asks Phil to speak at the funeral but is stunned when he refuses. Later on, Jack asks Billy for a favour.

Meanwhile, Sharon questions Phil and tries to get to the bottom of why he won't speak at the funeral. After a grumpy Phil snaps at Sharon.

Phil later receives a suspicious call and agrees to meet the caller. Meanwhile, Louise gets invited on a date by Travis.​​​​ 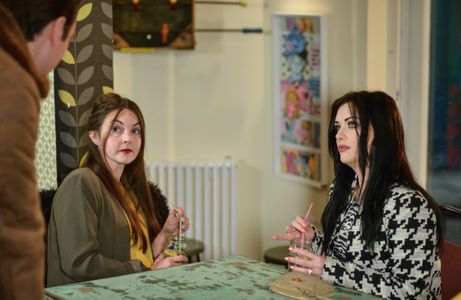