It’s Mick’s birthday and Linda is determined to have one last day with her family before she goes to the police to report Dean. However, Nancy and Lee are in no mood for celebrating as they grow ever frustrated at their parents’ silence about what has been going on and storm out. As Mick goes to find them, Shirley arrives at The Vic with a birthday gift for him and ignores Linda’s plea to leave. Linda’s biggest fear comes to life when Shirley tells her she doesn’t believe her accusations against Dean. An adamant Linda describes her ordeal to Shirley but Shirley leaves but before she goes, she leaves his present on the table– but who does Shirley believe? When Mick returns, Linda tells Mick she can’t keep silent anymore and the couple head to the police station.

Worried for an innocent Phil’s future, Charlie and Sharon desperately try to find a way to get Phil out of prison. After disappointing meeting with her ex-lawyer Ritchie, Sharon tells Phil they can’t tell the truth for the sake of the baby – he can’t grow up without a father.

A hungover Stacey reluctantly agrees to go for a run with Shabnam and when they bump into Kush, Shabnam pretends she’s out of breath and un-prepared for the marathon. 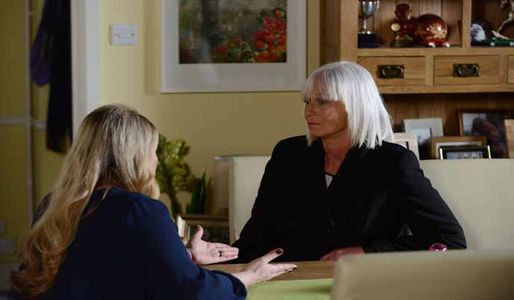