Eastenders 19/05 - Kat is worried the plans will fall through

Kat and Alfie continue their preparation to start their new life but it soon becomes clear that Kat is worried the plans will fall through despite Alfie and Stacey’s reassurance. Later, Kat and Alfie head to The Vic and share their future plans. Alfie later finds Kat upset in the toilet and she opens up about her fears.

Elsewhere, Shabnam does her best to avoid Dean causing Masood to grow suspicious about his daughter’s odd behaviour. Shabnam returns home to talk to Masood but instead Dean arrives at the house to confront her about what she said. Shabnam finally admits that she had Dean’s baby after their one night stand however she then lies and tells him that the baby died from complications. Later, after opening up to Stacey, Shabnam meets with Dean and during their conversation starts to trip up over her lies leaving Dean confused.

Phil panics when he finds Vincent and a tipsy Charlie drinking at the Albert and quickly puts an end to their conversation. Across the Square, Cindy worries that even when the Jane and Ian adopt Beth, she will still be responsible for her care as they live under the same roof. 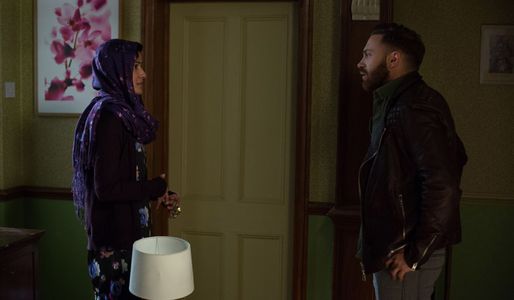