Denise is left doing everything and as Ian becomes more and more overwhelmed he ends up drags Bobby into it.

This is the last straw - Denise tells him exactly what she thinks of him as she calls it quits on their relationship.

Michael is furious when he learns Jack has sold Janine his half of the gym.

After trying to guilt Dot into changing Jack's mind, she reminds him that it's Scarlett who's most affected by this feud.

He decides to win by remaining professional.

Bianca convinces Kat to go on a double date with her and Ted, dubious at first Kat agrees.

The date goes well, a little too well, until Colin overhears Bianca asking Kat to switch dates - both men make a swift exit.

Poppy is desperately trying to raise funds to move into a flat with Fatboy, despite becoming increasingly suspicious of how much he's texting this girl, Chloe.

Working extra hard to get a bonus at work she ends up dropping Lola in it with Sadie - Lola is not impressed.

Carl is getting into his mind games - he tells Kirsty the two of them would never work. Knowing what he's doing Max questions his intentions. 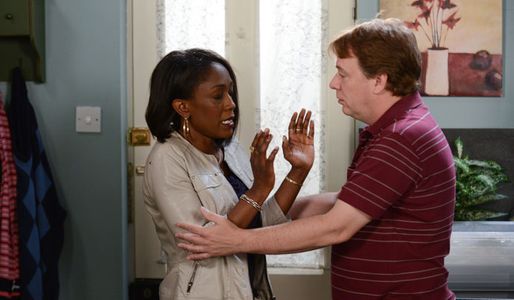 Eastenders 26/08 – Denise is worried about the social worker