Eastenders 19/12 - Bex Is Disappointed By Shakil's Lack Of Enthusiasm

Linda and Stacey turn to a reluctant Ian to donate a tree to the Square but when Ian refuses, Linda comes up with another idea.

Meanwhile, the Carters learn that Ollie’s assessment will be in the New Year. Wanting to help Linda, Whitney invites the family over for Christmas Dinner but Lee panics when he sees howmuch everything will cost. As the residents embrace the Christmas spirit, the Carters share somemagical news

Ronnie worries about Roxy’s whereabouts when Donna reveals she’s failed to turn up for work again. In the park, Ronnie spots Roxy and suggests they meet up later to choose the wedding hairstyle with Amy. Ronnie is frustrated when Roxy fails to show and elsewhere,

With more important things on her mind, a fed up Louise tells Bex to talk to Shakil but when they meet up to discuss their relationship, Bex is disappointed by his lack of enthusiasm. After confiding in Stacey, Bex goes to watch Shakil rehearsing but quickly leaves after an embarrassing incident.​​​ 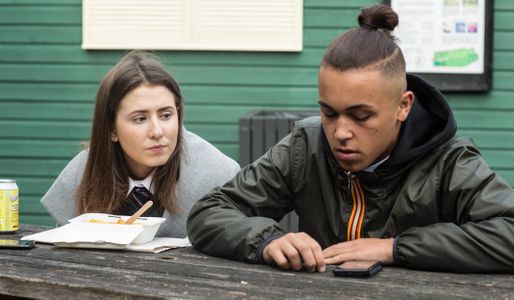