Sharon struggles to come to terms with seeing her biological father for the first time and soon asks Phil to take her home. Reeling from the day’s events, Sharon takes matters into her own hands and visits Vincent to discuss The Albert. Sharon warns Vincent that she’s not afraid to go to the police about the forged signature and wants to be his business partner. Will Vincent accept her offer? Following her meeting, Sharon heads back to Gordon’s house alone and tells him she’s his daughter.

Meanwhile, Phil and Ronnie fear what Sharon has said to Vincent when they are unable to locate her. They both agree to remind her she’s a Mitchell and needs to make sacrifices for the family but are left stunned when she arrives home with Gordon and introduces him to her family.

Elsewhere, it doesn’t take Les long to realise something is not right with Paul and later learns that his Grandson knows something is going on between him and Claudette.

A worried Jane breaks the news to Ian about Cindy’s change of heart about them adopting Beth, leading to an argument at the Beales. Annoyed at his tough approach, Jane goes after Cindy but fails to find her. When she returns to the Beales Ian and Bobby are sat on the sofa adamant that Beth will be part of their family no matter what. 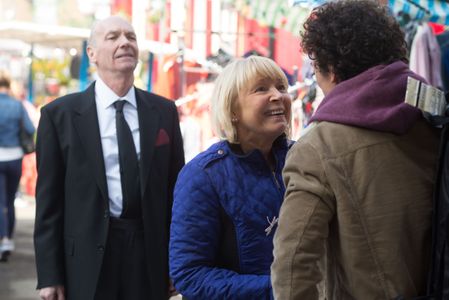