It’s Donna’s birthday and Pam is determined to make it special by organising a last minute party in The Vic. Despite Donna’s fears no one will turn up, the party gets off to a great start but soon takes a turn when a drunken Martin flirts with Donna and goes to kiss her. Realising Martin is flirting for a bet; Fatboy lashes out at Martin ending the party early. Outside, Pam has a surprise for Donna …

Martin’s day goes from bad to worse and after taking his frustration out on various residents including Sonia, decides to go to Donna’s party. After his run-in with Fatboy, Sonia confronts Martin about his behaviour but she is left stunned by what he says.

Meanwhile, Tamwar and Shabnam spend the day together and open up about their relationship fears. Feeling more positive, Shabnam decides to face Kush and heads to The Vic for Donna’s party. Left alone, Masood takes a risk

Back at The Vic, Shabnam is worried by Kush’s drunken behaviour and takes him outside where he drops a bombshell …

Elsewhere, Cindy is up to no good and invites Liam round who brings alcohol for her and Rebecca. 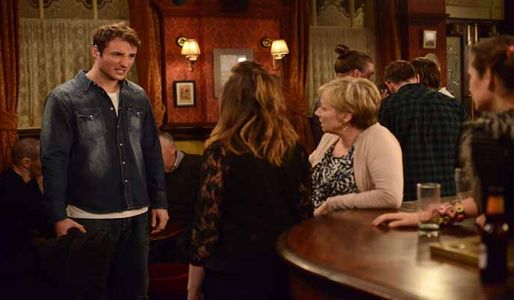